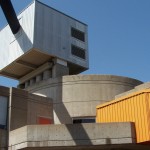 Constructed in 1970 in the midst of Urban Renewal, the Mummers Theater (now Stage Center) replaced a square block of 19 older buildings to become the first of the Urban Renewal projects to be completed.  The building’s unique design won Johansen the coveted AIA Honor award in 1972, and it is often cited as his masterpiece, but from Day 1, the structure was controversial.  Although it was instantly considered a classic in architectural circles and by many in the community, a lot of people scratched their heads when they first looked upon all of that concrete and color.

In 2010, the building was heavily damaged in a big flood, leaving its fate up in the air.  People who hated this building for 40 years — and even admirers of Stage Center who had tried to make an impractical building more user friendly — were ready to tear it down and build something more “normal” (i.e., bland and boring), and they finally won the long battle in 2014 to destroy this, Oklahoma’s most unusual piece of modern architecture.  Here are a couple of photos of the demolition: 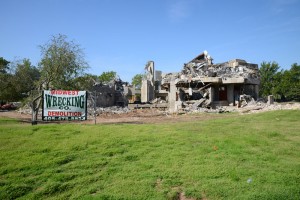 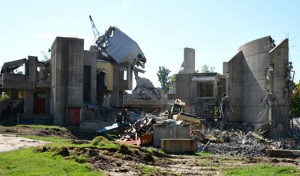 For the full history of the building and the fight to save it, go here.